100 years ago, on 1st December 1919, the first woman MP took her seat in Parliament. Nancy Astor, Conservative, was voted in at a by-election in November.

It was only a year since some women had been allowed to vote in a general election for the first time, and also to stand as an MP. In that General Election of 1918, 17 women had stood, including some well-known suffragettes, such as Christabel Pankhurst and Charlotte Despard. Just one woman was elected, Constance Markievicz, but in common with all Sinn Féin candidates, she did not take up her seat. Nancy Astor was therefore the first woman to enter Parliament as an MP, the next year. 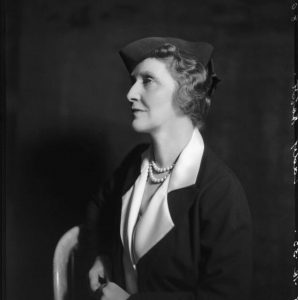 The by-election in Plymouth had been caused by the elevation of her husband to the Lords. An American by birth, forty years of age, and a glamorous member of the social élite, Nancy Astor had worked alongside her husband in the local constituency, and was selected to take his place. Although many suffragists and suffragettes came from this strata of society, Nancy Astor had never in fact given any support to the campaign for Votes for Women. Nevertheless, as the first woman MP, the suffragettes did support her.

It can’t have been easy even for someone with the social background of Nancy Astor to enter what was in fact an enormous white Gentlemen’s Club. Almost all its members had an enormous sense of entitlement. She had to fight to be able to use the eating-places in Westminster, and even to have an office. There were no women’s toilets for quite a while!

The adversarial style in the House of Commons meant that she was not always treated well, and had to suffer abuse, resentment and disdain. She had no female colleagues for two years. She adopted extremely modest clothing – a black skirt and jacket, white blouse and a sort of academic-style black cap.

Undaunted, Nancy Astor tried to represent her massive constituency of women. She worked hard to ensure many more women were recruited to public service jobs, and advocated women’s rights at work. As more women became MPs, she promoted cross-party working amongst them to achieve change for women.

Unfortunately, as she became older, she identified more and more with far right, anti-Semitic policies, and stood down in 1945.

A statue had been erected in Plymouth this week to mark the centenary of Nancy Astor taking up her seat as an MP.