A Song of Their Own

Women are always a chorus joining in men's songs, never allowed to sing a song of their own. 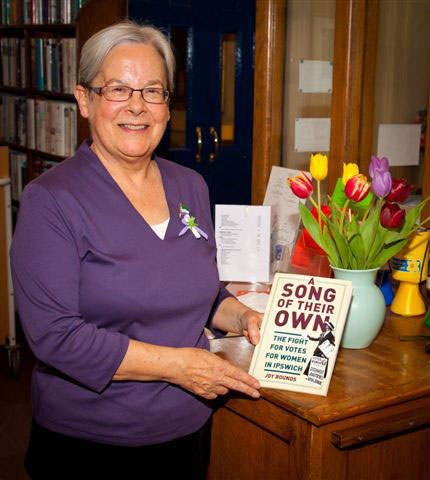 Women had already been demanding to have a say in the running of the country for the best part of half a century by the time the speaker stood up and said this at a Stowmarket suffrage meeting in 1911. The legitimate demand for the vote was attracting large numbers of women, who made their protest at the lack of response from the Government in a variety of ways.

Most people have heard of the Pankhursts and the London-based radical acts they organised - huge processions, determined parliamentary protest, window-smashing campaigns - and the high price they sometimes paid - imprisonment, hunger-striking, forcible feeding, poor health and even death. What is less well known is that such activity was supported by thousands of women in towns and villages across the country, who organised their own protests locally.

A Song of their Own is a record of what women in and around Ipswich did to increase the pressure on the Government to allow them the vote. It starts with the local signatories to the first petition in 1866 which was instigated by Aldeburgh's Elizabeth Garrett Anderson and her friends. It tracks the development of women's suffrage societies in the town towards the more radical protest after 1909. Details are given of the 1911 Census evasion protest (No Vote, No Census), and of the prosecutions for non-payment of taxes (No Vote, No Tax), and many other varied protests. The women often had to operate in a hostile atmosphere, suffering verbal and physical violence.

Through these stories, we become familiar with the individual women who formed a close, supportive group to achieve their ends. There are brief biographies of all the women so far identified.