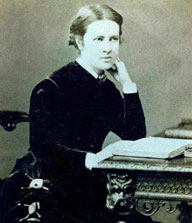 The centenary of the death of Suffolk’s Elizabeth Garrett Anderson (1836-1917) is celebrated this year. She was a remarkable woman – most notably she became the first woman doctor to practice medicine in this country – and was a pioneer at a time when women’s lives were very restricted. She fought on many issues, including the votes for women campaign.

Sadly, she died just a year before the legislation was passed allowing some women (those over 30 who were householders or married to householders) to vote for the first time in a national election. It would have been fitting for her to pop her voting paper in the ballot box, because she was key in starting off the whole women’s suffrage campaign.

The focus on the radical, militant suffragette campaign which the Pankhursts orchestrated in the first years of the twentieth century has tended to obscure the fact that the campaign had already been going for some forty years. It was actually in 1866 that the first petition was presented to Parliament demanding the vote for women.

In the 1860s, Elizabeth Garrett Anderson was a young doctor fresh from her long fight to gain the necessary qualifications in a world where the powers-that-be held that women had no place. She was part of a group of bright, ambitious women in London who thought it was more than time that the restrictions on women’s life and opportunities fell away. If only women had influence in parliament, they thought, they could make change happen.

With the help of sympathetic MPs, Elizabeth Garrett Anderson and her friends got together The Ladies Petition,  asking for the vote, which was presented to parliament in 1866. As we now know, dozens of petitions as well as almost every other form of protest would be required before parliament acceded to this reasonable request 50 years later. Elizabeth Garrett Anderson continued to join many of these protests throughout her life.

Her achievements will be recognised at a commemorative weekend in Aldeburgh in October 2017. For details of events go to www.elizabethgarrettanderson.org.uk.

Posted in A Song of their Own - women's suffrage

This site uses Akismet to reduce spam. Learn how your comment data is processed.