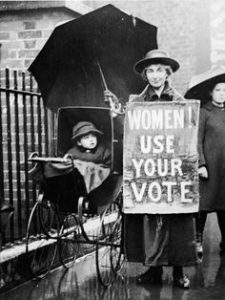 The first general election in which some women could vote was called for 14th December 1918. Remember that although all men over 21 could now vote, only women over 30 who were householders or married to householders could vote. Other women would have to wait another ten years for full equality.

In Ipswich, the electorate was now roughly 37,300, and of these 16,500 were women. If all women had been able to vote on equal terms, they would have outnumbered men by a considerable margin (and that wouldn’t do, would it?) No woman stood for parliament – and in fact, there would be no women candidates in general elections in Ipswich for several decades (there has never been a woman MP, and only in recent years has there been one in Suffolk Coastal and Bury St Edmunds).

Although we rightly celebrate this first election, we shouldn’t forget the context. The dreadful horrors of the World War were scarcely over, and there were feelings of grief and loss in all communities, as well as dismay at how the country would recover. In terms of the election itself, there was a shortage or paper and print, so it was hard to get leaflets and posters out.

So what happened on the day? In Ipswich there were 42 polling stations, and women clerks sat with their male colleagues to assist women to cast their vote, and step in if a husband tried to influence his wife’s vote. Polling was apparently heavy, with many women voting in the morning. Often they would look after each other’s children and go in groups to the polling station. Mrs Rowley Elliston, wife of an Ipswich local politician, claimed she was the first woman to vote – at 8am at Ipswich High School polling station.

Although no woman stood as candidate to become a local MP, there were seventeen women across the country who did stand – including several well-known suffragettes. Sadly, none of them were successful – a real blow, as it was hoped that women in parliament would help remould post-war society – except for radical campaigner Constance Marcievicz, who was in prison at the time and as a Sinn Fein MP, refused to take up her Westminster seat.

Suffolk-born Millicent Fawcett wrote this in the suffrage newspaper The Vote:

This is the greatest General Election in the history of the realm. It has taken women half a century of effort and self-sacrifice and courage in the face of contempt, and determination in the face of brutality and injustice to bring home to the men who governed us the right of women to citizenship.