Lilian was one of four Ridley sisters and, together with two of her older sisters, Ada and Bessie, was a supporter of the campaign for Votes for Women (see Blog Ada Ridley – Suffragette Artist for more information about the family). She married local business man John Cranfield in 1889, and was widowed in 1908. 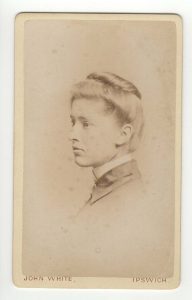 I first found Lilian mentioned in the national women’s suffrage newspaper Votes for Women in 1910, when she hosted what was called a drawing-room meeting at her home, The Cottage in Burstall, a small village just outside Ipswich. Drawing-room meetings and ‘at homes’ were a common recruiting method in the circles of wealthier suffragettes. The hostess would invite all her friends to afternoon tea, and to hear a speaker. It was a way of getting new members – and of raising significant funds.

On this occasion, the speaker was Maria Brackenbury, a London suffragette touring, as were many colleagues, the towns and villages of the country. At this time, the Women’s Social and Political Union, headed up by Emmeline Pankhurst, had called a truce in their increasingly militant campaign. There was reason to hope that a cross-party agreement would emerge in parliament which would force the reluctant Liberal government to give women the vote.

We know that Lilian’s sister Bessie had supported the cause for several years. In 1907 she was recorded as being on the committee of the more moderate Ipswich Women’s Suffrage Society. And in 1909 her sister Ada also became involved. Lilian hosted several such meetings that summer of 1910 and gave sizeable donations to the WSPU. In June, she joined roughly twenty other Ipswich women under her sister Ada’s hand-crafted banner, made of purple silk and velvet, for the huge Women’s Coronation Procession in London.

Her enthusiasm was such that it is said that during the next month almost the whole village of Burstall turned out to hear national suffragette Mrs Mansell speak. There is a local story that speakers stood on the cottage balcony to address everyone gathered below.

I haven’t been able to substantiate another village story that Emmeline Pankhurst stayed at The Cottage. It is possible, as she came to Ipswich in July 1910 to speak at a large public meeting, and may well have stayed overnight in Burstall.

No other reports of suffragette activity by Lilian have yet been found. Later that year, the hopes of gaining the vote were dashed once more by a treacherous government. The WSPU intensified the militancy of its campaign, and many supporters felt unable to continue to support them. Lilian Cranfield may have been one such. Her great niece told me that when she died, a bureau drawer full off suffragette badges, sashes etc was found.

Lilian remained active in the community throughout her life. She had built, in Burstall, the still-thriving, elegant village hall in memory of her husband as a place where men could pursue leisure activities in an ale-free environment, and later commissioned an arts and crafts house for herself nearby. She later lived in London for a while, then in Felixstowe before returning to Ipswich. In 1940 she bestowed Cranfield Court, an elegant set of alms houses in Ipswich, for retired working women of moderate means.

Many thanks to James Paul, great, great nephew for a picture of Lilian from the family album. Also to Ann Day and other Burstall friends for additional information, and to Jill Ganzoni, great niece.