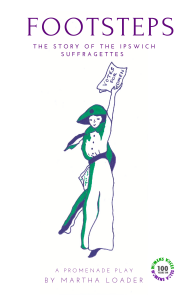 Take a virtual walk around Ipswich with this audiotrail of Footsteps and be entertained and informed about the local women who fought for the vote. This is a promenade play by Martha Loader based on the stories in my book A Song of their own, and was specifically written for the Women’s Voices Women’s Votes Festival in 2018, celebrating 100 years since women got the vote.

Post coronavirus, we will be able to walk the streets of Ipswich with the audiotrail, and buy a booklet of the play at Ipswich Tourist Information Centre. In the meantime, enjoy the play from your sofa. The audiotrail includes songs by Holly D Johnston and the WERCA women’s chorus. 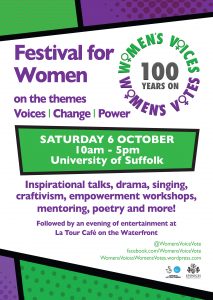 One of the run-up events might be of special interest:

On September 29th, October 4th and 5th, at 11.30am and 2pm, you can come and see Suffolk suffragette stories acted out on the streets of Ipswich, and visit our 1918 Polling Booth.

Then on the 6th October, come to the University of Suffolk on Ipswich Waterfront for a great Festival Day which runs from 9.30am to 5pm. There’s so much to interest everyone here – we will once again be celebrating 100 years since women got the vote, also looking at where we’re up to in terms of gender equality, hearing how women can become more involved in civic life, as well as lots of inspirational talks and performances – plus an evening of entertainmentat a nearby venue. All organised by women for women, but everyone is welcome. More details from www.womensvoiceswomensvotes.wordpress.com 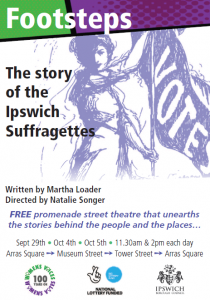 Talk about the Ipswich Suffragettes at Ipswich Institute

Everyone is welcome to come along to this illustrated talk entitled Votes for Women: The Ipswich Women’s Campaign. You don’t have to be a member of the Ipswich Institute, just book in advance by phone (01473 253992) or at the desk – cost is £3.50.

Most people know how hard women fought for the right to vote in the early 1990s. But as well as the big actions in London and other major cities, women also conducted campaigns in towns and villages throughout the country. Ipswich was no exception and many brave women mounted steady pressure on the Government. Some women spent the night in the Old Museum Rooms in Ipswich as a protest, and soon afterwards one of them found herself in Ipswich Gaol.

5:2 diet for vegetarians – now IN PRINT

I’m thrilled to bits that my little veggie cookbook is now a print book as well as an ebook. It came out as an ebook about 2 years ago, and has sold quite well, so I was delighted when the publisher Luscious Books decided to put it into print. Although many people are happy to cook from recipes on their tablet or ereader, many will prefer to have the printed page in front of them. I have returned to the book time and time again myself, because when you’re only allowed 500 calories on a diet day, it’s great to have all that fiddly calorie-counting done for you. Why not give it a go? 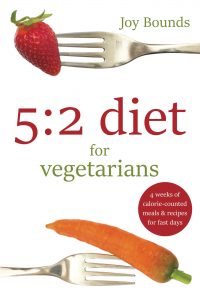 Wild Words is led by psychotherapist/writer Bridget Holding, and it encourages writers to connect with the natural world to find inspiration – finding the wild, and taming the wild. She has started a blog about The Writer’s Process, and you can read my contribution about how I’ve been revising my novel at:

A new Joan of Arc Statue 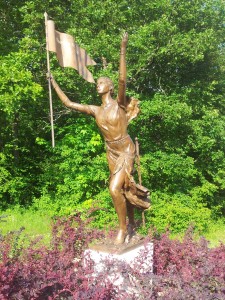 Readers of my novel Far From Home, and other people who study Joan of Arc (Jehanne), will know that as a child she went with her mother to the little hermitage of Bermont, about half an hour’s walk from her village of Domremy into the forested hills. It was place that she loved, and it seems that there has always been a chapel and religious settlement there. Now the chapel has been refurbished, though it is only open occasional Saturdays. It is still a very beautiful and peaceful spot where I always spend some time when I visit Jehanne’s home country. This new statue by the chapel seems to celebrate not only the young girl warrior, but something of her free spirit and love of outdoor spaces.

Award-winning writer interviews me about food

Tracy Fells has interviewed me about my new book 5:2 Diet for Vegetarians on her blog The Literary Pig. I think her blog might have this name because Tracy loves to snuffle out tasty literary morsels, so it’s especially fitting that she asks me about this book. She focusses on how I chose the recipes and how I went about testing them. You can find the blog piece and a number of comments at http://tracyfells.blogspot.co.uk/2015/02/feeling-peckish.html?showComment=1424516586685

On Darwin Day February 12th, Arlingtons Brasserie in Museum Street, Ipswich, will be celebrating the history of its famous building. There will be a guided walk around the town at 2.30pm learning about Darwin, and then full afternoon tea and talks in the restaurant at 3.30pm. There will be a further talks about the science heritage there, and then I will be giving a talk about how the Ipswich suffragettes locked themselves in for the night in April 1911 as part of their campaign for Votes for Women. Tickets for the whole event are £12, or £8.50 for tea and talk only, and can be bought from the TIC or go to www.arlingtonsbrasserie.co.uk for more details.

Two poets and a bit of local history

Quite a crowd enjoyed listening to an unusual but successful mixture of poems and stories about Ipswich suffragettes at the Ipswich library. Harry Man is an award-winning poet from London and he and local poet Robert Lenney read poems on all kinds of topics. I focussed on the creativity of the local suffragettes and some of the actions they took over a hundred years ago to secure the vote for women. As the event took place in the library, I talked about the local writer Isabel Tippett, and also read from A Song of their Own about the propaganda plays performed at the Ipswich Lyceum in 1911.

A Song for Equal Rights

This is the heading of a small article in September’s Writing Magazine. In it, I talk about A Song of their Own,  and make the point that there was little difference in the nature of the research needed for my novel Far From Home, about Joan of Arc, and this non-fiction local history book about the suffragettes. The work has to be done – it’s painstaking but enjoyable.

A Song of their Own – Cake, tea and great suffragette stories 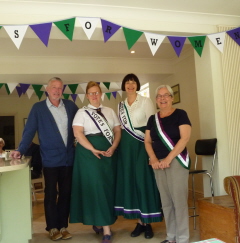 About 70 people enjoyed hearing about  local suffragettes, and especially how the Bath Hotel at Felixstowe came to be burned down, at the Felixstowe’s Book Festival’s vintage tea parties at the end of June. Dick Moffatt, who has just published a book about the history of the Bath Hotel, joined in on the Sunday.

Far From Home has been shortlisted by Writing Magazine for its 2013 Self-Publishing Award.

Of the six novels shortlisted, the judges said ‘… the standards get higher each year … Many entries would be indistinguishable from titles produced by mainstream houses, not least our … shortlist.   Lucy Walton of Female First has interviewed me about why I wrote the Far From Home, how I went about the research etc. Read the full interview at www.femalefirst.co.uk/books/Joy+Bounds-236088.html http://herstoria.com/?p=587#more-587  is a website devoted to women’s history, and I have written an article there giving the historical facts about Joan of Arc’s family, which I used in writing the novel. If you are wondering what in Far From Home was based in fact, and what based in imagination, this is the place to go.