As we begin to complete the lengthy forms that are required for the 2021 Census – and perhaps think about whether we are going to use the categories of ethnicity or religion to make our own political points – it’s worth remembering the Census Boycott that took place in Ipswich in 1911.

110 years ago, getting on for 30 women shut themselves in the Old Museum Rooms in Ipswich overnight, so that their details would not be recorded on their household Census schedules. It was part of the Votes for Women campaign which had already been underway for over 40 years, and which was reaching its climax at this time.

Two slogans used at the time encapsulate the essence of the protest:

No Vote, No Census

The Census Boycott was a national action designed to bring together all suffrage campaigners, radical or not, in a mass protest to embarrass the Government, which would not be able to rely on the accuracy of the information collected because an unknown number of women had not filled in the form. Even today, when our personal data is captured in so many places, the Census is seen as an essential snapshot of the population of the UK, from which the Government gets the information it needs to plan housing, schools, health and other public services. Think about how much more important it was when there was no other centralised information.

There were two ways in which women could deny the Government their personal information. Firstly, they could refuse to fill in the form. Instead of household details, they might write their own message on the form eg. If I am intelligent enough to fill in this form, surely I can put a cross on a ballot paper. It was (and still is) illegal to refuse to complete the schedule, howeer, and although some women were happy to embrace the possibility of prosecution and fines or imprisonment (a lot of suffragettes were in prison at this time for various forms of protest), many were not. Secondly, they could evade completing the schedule by not being at home, or in anyone else’s home, on the designated Census night (in 1911 this was Sunday 2nd April), so that their details could not be recorded. This was not illegal, and resulted in many imaginative ways of passing the night, including walking the streets of London, or travelling around all night in a horse and carriage, or staying all night in a public space. 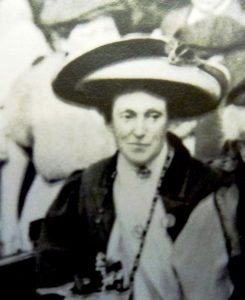 In Ipswich, there was a very committed and stalwart group of suffragettes under the charismatic leadership of local woman Constance Andrews (pictured). They preferred an action that would enable them to support each other, so hired offices in Museum Street in Ipswich and spent the night there. This would be a brave venture at any time, but quite extraordinary in 1911, given societal attitudes towards women at that time, and the preference of most people to comply with Government instructions. In addition, Ipswich suffragettes often suffered verbal abuse and physical threats when they appeared in public, and so some supportive husbands kept a guard at the door to ensure their safety.

Photos of women in other parts of the country engaged in similar events show them sleeping, but it is obvious from newspaper reports that the Ipswich women held an all-night vigil, or even a party!

All our party having arrived, Constance wrote, we had supper, then coffee at 4.30am and a hearty breakfast at 7am. After supper we assumed various disguises in case of intruders appearing…. Speeches and songs were now the rule and all began to enter with zest into the spirit of the thing. By this time we had all reached a fairly high pitch of merriment and enthusiasm. We of course all joined heartily in our Suffragette Marseillaise, and The Awakening… ghost stories…whist drive…reading…playing Patience…charades…. After breakfast there was a gradual dispersal (Evening Star, 3.4.1911)

No single protest would change the stubborn Government’s mind, but this action undoubtedly embarrassed the Government and created a lot of local debate and publicity.

Protest would intensify in the next three years until called off at the start of the first World War. After about 50 years of campaigning, some women (those over 30 who were householders or married to householders) got the vote in 1918, and all women equally with men in 1928. 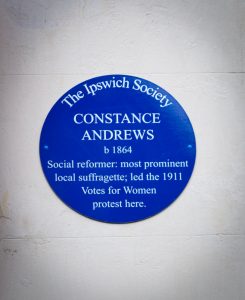 Constance Andrews is honoured with a blue plaque at the site of the protest in Museum St, Ipswich

More detail can be found in my book A Song of their Own: The fight for Votes for Women in Ipswich (The History Press, 2014)

For a humorous take, listen for free to the play/town trail Footsteps – the story of the Ipswich Suffragettes by Martha Loader on Soundcloud – https://soundcloud.com/user-969157779-676084807/footsteps-the-story-of-the-ipswich-suffragettes