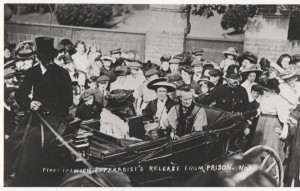 When Constance Andrews was released from Ipswich prison in May 1911 after a protest connected to the Votes for Women campaign, she was driven through the streets of Ipswich in an open cab. In this iconic photograph of the event, one of the only pictures we have of Constance Andrews (she’s the rather stern, determined woman under the saucer hat), we get a glimpse of the driver.

Any suffragette who took the enormous step of electing to go to prison, rather than pay a fine, was celebrated on their release. It was a big thing to do. Constance Andrews, like many other imprisoned suffragettes, was a woman who normally would never have dreamt of breaking the law or have thought to find herself in prison. She would, in the eyes of the law, have a stain on her character for the rest of her life. Such events were noted, highly valued, and celebrated by other supporters of women’s suffrage.

Such celebrations outside Holloway in London were famous, but the fact that Ipswich was far from the hub of suffragette activity didn’t make any difference. National suffragette leader Charlotte Despard (sitting next to Constance in the carriage with her distinctive white hair and veiled hat) came with other colleagues from London to meet her, as did many of the local suffragettes who were part of a close, supportive group. Long-term Ipswich suffragette Mrs Hossack is the other woman in the cab, with her back to us.

Constance Andrews was released from the tiny women’s section of Ipswich prison at about 8am, and the horse-drawn cab was hired to take her in procession, through the town centre of Ipswich to a celebration breakfast in Arcade Street. The driver was Mr William Miller, who was the subject of an article in the Evening Star in April 1955. He apparently started as a cab driver at the age of 13 in the 1890s. The newspaper goes on: Some of Mr Miller’s most vivid recollections concern the Suffragettes, those resolute ladies who were determined to obtain the vote for women at all costs – to themselves and anybody else. Bill drove Mrs Pankhurst*, the suffragette leader, and Mrs Hossack to welcome another stalwart, Mrs Andrews, on her discharge from Ipswich Jail. It wasn’t exactly a joy-ride. The crowd got nasty and it was touch and go whether its wilder elements would turn the cab over. Another time he took Suffragettes around town to address men as they left the various works … he had to whip his horse and dash off in a hurry; otherwise both he and his passengers would have received a rough handling.

A reminder of what hard and sometimes dangerous work it was to be a suffragette, and could involve threats and violence not just to the women themselves, but to those who helped them.

*NB. Records show no sign of Mrs Pankhurst being in Ipswich on that day. Mr Miller may well have driven her on other days when she came to speak in Ipswich. On the day of Constance Andrews’ release, Charlotte Despard was the suffragette leader in town.

Thanks to Bryan Potter for sharing with me the information about Mr Miller.