Why I Wrote Far From Home?

Interests I developed over many years came together in the writing of this book – history, fiction-writing and women’s stories.

When travelling through France one summer with my son, we stopped overnight in Rouen, and as tourists do, went to the Old Market Place where Joan of Arc (Jehanne) was burnt at the stake, age 19.

Up till then, I probably knew no more about her story than most people – ie, the bare facts. But in the strange way of these things, I became absorbed in her story, and wanted to know more about her family. What must her mother have gone through?
Several years later, an answer to that question is found in my novel. I have spent a great deal of time in the places in France where Jehanne lived, celebrated, suffered and died, and walked the countryside as she and her family did 600 years ago. Now I’ve used this, and the few known facts about her mother, to imagine her view of all these events.

Although the action of this novel took place nearly 600 years ago, I kept hearing it resonate with what was going on in the present. Was becoming a refugee any different then from now? Home sickness, insecurity and loss are always the same. Don’t we all know young people who create fear and alarm in their parents? What about the cruelty of ‘the system’ and the deep wounds of injustice? The grief of the bereaved parent is universal and timeless. Jehanne is one of the world’s unique figures, but somehow her family is like every other.

The book is dedicated to my son, Leif, who was with me on the day I first saw those images of Joan of Arc. He has become an academic historian since then, and I like to think that some of his rigorous approach to history has rubbed off on me as I blend fact and imagination in my novel. 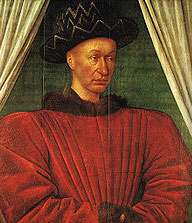 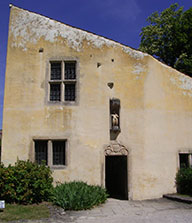 Birthplace of Joan of Arc

Posted in Far From Home

This site uses Akismet to reduce spam. Learn how your comment data is processed.